It is not often that you get an invitation to attend a full-day celebration of what is known as the oldest and most prestigious wine auction in the world. It’s the third Sunday in November and on a mild but wet November day, I head from my home in Dijon to the city of Beaune for the most important day in the wine calendar year in Burgundy: the 154th edition of the Hospices de Beaune wine auction

The Hospices was built as a hospital for the sick and needy in 1443 by Nicolas Rolin, the chancellor of Burgundy. The wine auction first started in 1851, when wealthy benefactors donated vineyards to the hospital which is now a non-profit organisation that boasts 150 acres of prime Burgundy premier and grand crus.

To summarize the importance of this event, when I was officially invited by the famous Bichot wine house (established in 1831 and the biggest buyer at the auction), my first reaction was that this was like being invited to the wine world’s equivalent of the Oscars!! OK I may be exaggerating slightly, but entry invitations are like gold dust – or a bottle of the famous Romanée Conti – to use a more appropriate aphorism…

But even better than an entry ticket to the auction, which in itself is the highlight of the day, I spent the best part of 10 hours, living the life of a potential buyer thanks to the Bichot wine house and its Hospices auction play-maker, Jean-David Camus. Here’s how the day unfolded…

Pre-auction barrel tasting of the 47 “cuvées” (or wines) started at 8.30 am in the “cuverie” (winery) where dozens of potential buyers slalomed their way through the labyrinth of barrels starting with the lower appellations, for want of a better expression, and ending with the grand crus. If you’re wise and you know something about Burgundy wine, then you choose the wines you wish to taste and, if you intend to make it to the end of the day, spit out the wine after swirling it in your mouth. These are wines that have just been put into the barrels and are far from the finished product. They are very young, so have high tannins (dryness) and high acidity (pucker) and only a true professional would be able to guess how marvellous these wines will turn out to be. 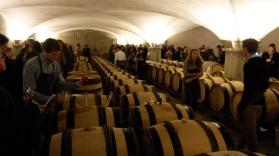 Our next meeting point was the Hotel le Cep, just a 2 minute walk from the Hospices auction room for the pre-lunch aperitif. The reception room was privatized by Bichot and we were served the wine house’s famous “crémant de Bourgogne rosé” or sparkling rosé wine along with an array of delicious canapés. Alberic Bichot, the President of the Bichot wine house, took time to speak to all of his guests in his usual relaxed and charming way, admitting to a small amount of stress and the inevitable lack of appetite. Being responsible for the bidding for a dozen clients, who are determined to secure their barrel without paying over-inflated prices seems to me like a pretty stressful captain’s role. In one corner of the room, international wine merchants were comparing notes on the quality of the barrel-tasted wines and eventual bidding prices, in the other, Alberic Bichot was being interviewed by the press…an electric atmosphere was building…the importance of the event was becoming even more apparent. Crowds had gathered outside the hotel to catch a glimpse of the colossal world judo champion Teddy Riner who was participating at the cocktail. When I asked if he appreciated Burgundy wine, he looked down at me (I’m 6ft 3!), smiled and said “maybe in a few years’ time, once I’ve stopped competitions.  For now I’m just soaking up the incredible atmosphere”. I forgot Teddy is only 25 and has won 7 World Championship medals and the Olympic gold medal. (By the way he is 6ft 8 and weighs 290 lb)

Lunch took place next to the hotel at the restaurant L’Oiseau des Vignes, from the famous Bernard L’Oiseau chain of gourmet restaurants. The food was delicious and paired with the Bichot house’s flagship wines including le Chablis Grand Cru “Moutonne” 2007, a Beaune 1er cru 2008 and to finish a Grand Echezeaux Grand Cru 2001. Needless to say, no one spat… The service and timing was impeccable, and without feeling rushed, everybody was finished by 2.15 pm, only 15 minutes before the auction was due to open. The Taiwanese guests on my table skipped coffee to prepare for the start of the auction. Their faces visibly showing both a mixture of excitement and a little stress.

At 2.30pm the covered antiques market, which serves as the auction hall opposite the Hospices, opened its doors to the “who’s who” of the Burgundy wine trade. Bidders mixed with local dignitaries and famous wine houses. Familiar faces such as Frédéric Drouhin, Louis-Fabrice Latour, the Boisset and Picard families and of course Alberic Bichot, accompanied by their illustrious guests, took to their seats near the front of the auction. In typical French tradition, the start of the auction took place 30 minutes late, when the Christies auctioneer actioned the hammer for the first time. Up on the auctioneer’s platform, next to the auctioneer stood this year’s celebrity guests whose role is to represent a charity and add some extra charm to the event. The three celebrities were a TV personality, Michel Drucker, an ex-model and TV personality, Adriana Karembeu and the judo world champion Teddy Riner.

As you can imagine when auctioning 534 barrels (containing 228 litres or 304 bottles or 60 gallons), its takes some time. Christies managed to mix in some grand crus bidding early on, which guarantees some excitement and stopped some of the less enthusiastic guest from sending text messages (or maybe they were just Tweeting?) especially when after selling the first barrels for around 7000€ a shot, the first grand cru Clos de la Roche reached a staggering 70,000€ the barrel! Cue the first gasps of amazement and applause of what would be a marathon 6 hour auction session!

There is no doubt the true highlight is the auctioning of the President’s barrel, for which the proceeds go to two different charities. This year they included the Foundation Imagine, which diagnoses genetic illnesses and the association “tous à l’école” (everyone at school), which provides a school and education for underprivileged girls in Cambodia. It was decided that the bidding would be done by multiples of 2 as the cost of a diagnosis is around 2000€. The challenge was not just to beat last years rather modest 130,000€ for a barrel of Meursault 1er cru Les Genevrières but to try and beat the 400,000 € record held since 2010.

The Presidents barrel was a grand cru (the highest appellation) Corton Bressandes Pinot Noir. Excitement reached fever pitch as the barrel bid went from 2,000€ to 110,000€ in three minutes!! Each celebrity worked their hardest to woo the crowds and increase the bids, from promises of dinner with François Holland (boos) or Brad Pitt (cheers), Adriana offered her diamond-studded glasses to the bidder who topped 200,000€ and an intimate dinner if it made 300,000€ and Teddy Riner promised a private judo lesson with physiotherapist thrown in…literally! Five minutes later Alberic Bichot promised the 200,000€ amid applause and was offered the diamond-studded glasses by the beautiful Adriana. He braved the flashing cameras and tried not to look too embarrassed when trying them on. But bidding wasn’t finished and Alberic finally bid 220,000€ to secure the barrel for his Canadian clients who were given a standing ovation from all present.

At 4.55 pm the auction tried to regain some composure and the bidding continued. At 8.08 pm the total bids for the afternoon passed the 7,000,000 € mark and the hammer resounded in the hall for the last time at 8.11 pm.

A mixture of elation and genuine fatigue was etched on the faces of those who remained in the hall until the end. The final results overtook expectations. The final total had reached 7,347,242 €, an increase of 5.52% on 2013. The white wines (chardonnays) although only representing about 1/5 of the wine sold, showed the highest gains of 14.08% whereas the pinot noirs showed a more modest 3.34%. This proves once again, the quality of chardonnays made in Burgundy and the excitement that surrounds them. Those auctioned represented undoubtedly some of the finest chardonnays in the world.

From a professional stance, the auction inevitably showed its glamourous side and thrills at the high peaks in bidding which, although great for the ambiance, did not seem to worry the Burgundy wine professionals after the heady and somewhat unrealistic price increase in 2009. Prices soared to giddy heights back then, and speculators believed that the Burgundy bubble may burst if prices continued to spiral out of control. Since then, although prices have kept rising, they have not been over-excessive. This year’s auction proved that the average selling price remains fairly reasonable. The Burgundy wine markets needs quantity and quality. The former has been lacking due to difficult weather conditions in the last four years. The latter, fortunately, is still in abundance.  There is still some way to go before the Burgundy estates can feel comfortable about the future of their prestigious yet fragile wine region as they have suffered considerably from four years of hailstorms, but the 2014 vintage has hopefully just started to put this right.

So as the “3 glorious days” festivities (Les Trois Glorieueses) in Beaune bid “fairwell” to the 2014 Burgundy wine season, it’s also time to say “goodbye and thank you” to Roland Masse as the head winemaker of the Hospices for producing some exquisite wines over the last 15 years and to say “welcome and bonne chance” to the young and highly talented winemaker Ludivine Griveau, who will be taking the helm and by the same occasion is the first female winemaker at the Hospices.

It’s my turn to thank Alberic Bichot and Jean-David Camus for making this a remarkable day for me too.